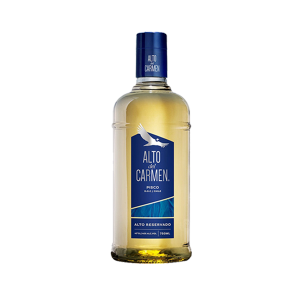 Pisco is the oldest spirit made in the Americas. Spanish Conquistadors brought the first wine-producing grapes to the continent some 500 years ago. While pisco can be distilled from one or a blend of 8 varietals, the prevalent grape is white Muscat, a hardy, golden-yellow variety with succulent aromatics and a gentle flavor. Stringent production regulations by the Chilean government assure the highest possible quality of their country's national spirit. Few illustrate this better than Alto del Carmen Pisco Reservado.

The young, vivacious brandy is made in the town of Alto del Carmen, which is located in northern Chile in the Huasco River Valley at the southern reaches of Atacama Desert. The valley is situated high in the Andes Mountains roughly 2000 meters above sea level. The wine-growing region is renown for its varieties of Muscat grapes.

Referred to a "Puro Pisco," Alto del Carmen Reservado is a 100% natural brandy double distilled in small batches from Muscat grapes and pristine spring water drawn from the nearby mountains. After distillation, the young brandy is aged six to eight months in 200-liter American white oak barrels. When the aging pisco has reached maturity, its is filtered and bottled at 40% alcohol (80 proof).

Alto del Carmen is a sublime treat. The light, golden hued brandy has a satiny body and a generous floral, vegetal and citrus bouquet. The longer the pisco is allowed to breath, the more of its aromatics are released. It has a smooth, gentle entry and barely raises any heat as it bathes the palate with lightly spiced, fruit flavors. The lingering finish is warm and laced with notes of black cherries, plums, vanilla and toffee.

Alto del Carmen is a celebrated brand of pisco and is especially popular with mixologists. Its wafting aromatics and broad array of flavors afford it many applications behind the bar. Little wonder why piscos are skyrocketing in popularity around the country.

Interestingly enough, this is not the first time that pisco has made it big in the States. During the California Gold Rush, miners from South America streamed into San Francisco bringing with them ample stock of Peru's native spirit. Its popularity with the locals gave rise to such classics as the Pisco Sour and Pisco Punch. The brandy's run came to an end with the onset of Prohibition when it all but disappeared in the States.

With Alto del Carmen Pisco Reservado on the backbar that won't happen again.